Hope you had a great week! As you might suspect from my last Report, I’ve spent much of the week recovering from my travels, doing laundry (i.e. dropping off clothes at Wash Club), cleaning the apartment (i.e. booking a Handy), and offering unsolicited advice to Mary J. Blige’s A&R man.

Check out Kaytranada’s remix of the Mary J. classic, “I Can Love You:”

In addition to doing those things, I’m still working on a bunch of projects that I hope to share with you in the next few months.

Other than that, the week was pretty uneventful. But here are a few ICYMIs:

1.  I’m still getting good feedback about my “Produced By Missy Elliott” playlist. And, of course, there was THIS

You can check out my Missy-approved selections on Tidal & Spotify.

2. Tuesday, April 25th marked the 15th anniversary of the tragic death of TLC’s Lisa “Left Eye” Lopes. I posted a tribute that I wrote about her at the time. It was based on a Honey magazine cover story that I had written the year before.

3. I got another FIVE STAR review of my novel, Who’s Your Daddy?

Special shoutout to whoever wrote this! If you liked the book, please do me a favor and write a quick review. It really helps.

I love Kendrick Lamar’s searingly introspective new album DAMN. But not as much as his momma. Here’s her emoji-laden take on her son’s masterpiece. 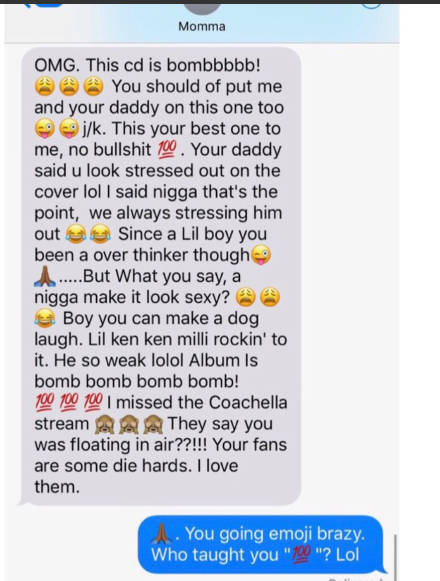 IMHO, this is the best bit of homegrown music criticism since @deactivatedfatgirl’s epic review of Beyoncé’s  self-titled 2013 opus. Lest we ever forget, I’ll recap:

It’s early morning on December 13th, right after Bey surprise-released her much anticipated album and in her own words…

Well, in those wee hours, Mrs. Carter also posted this on IG:

@deactivatedfatgirl had the only appropriate response:

(Btw, you should also check out Greg Tate’s incisive rumination on Kendrick’s album. Tate compellingly argues that “the truths spoken by hiphop’s prophets are…democratically applicable to all living under the reign of Mein Trumpf.”)

Remember a few weeks back, around the time of Billie Holiday’s birthday, I told you guys how much I liked Zadie Smith’s short story that is written from Billie’s perspective. Well, the story, which first appeared in The New Yorker, was actually written for the new book Billie Holiday at Sugar Hill. The book compiles many of the pictures taken by photographer Jerry Dantzic when he was hired by Billie’s record company to chronicle her April 1957 stint at the Sugar Hill club in Newark, NJ. She was performing there because, due to a drug conviction, she was banned from performing in NYC clubs.

The pictures capture a thin but healthy-and-happy-looking Billie, who had just gotten married. Sadly, within two years, she was dead.

Here are some of my favorite pictures from the book. Predictably, if you know anything about my photography, I like a lot of the blurry, soft-focus ones. Anyway, I highly recommend the book for you or the Billie lover in your life. 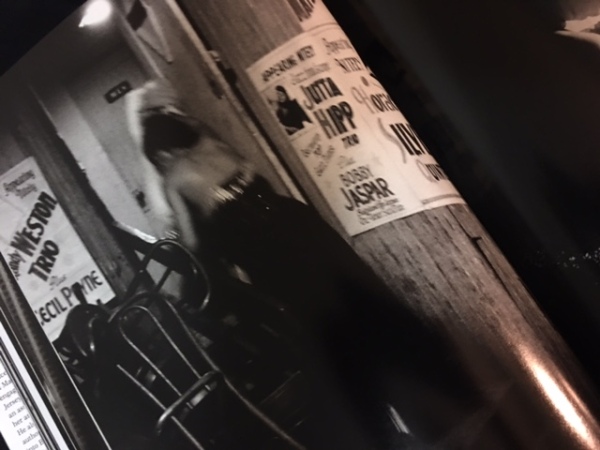 Sidenote: I love this last photo because it reminds me of one of the most visually stunning films that I’ve ever seen.

From the WTF files comes this all-piano version of Frank Ocean’s Blonde. The mysterious pianist manages to capture the intimacy and eloquent beauty of Frank’s songs, and the stripped-down quality gives the album a deeply meditative feel. Play amidst repeated streams of “Chanel,” “Slide,” “Biking,” and “Lens.”

O.K. y’all, as always, it’s been fun! But I gotta run to Target because

Be cool, be kind, be creative, be yourself. Love, Craig

P.S. If you know someone who might like this Report, please do me a favor by forwarding it to them and asking them to subscribe. Thanks!

I’m a writer/photographer whose work has been featured in The Washington Post, the Chicago Tribune, Entertainment Weekly, Vibe, Spin, and other publications. I have a Ph.D. in American Studies from the University of Maryland at College Park.

Providence-based photographer Michael Allen, a gay man on the cusp of 40, thinks he’s found love with a 19-year-old, mohawk-sporting artist named Ziggy, only to discover that the two may already share a bond that neither can imagine. This plays out as Michael’s best friends-Sidney, a 50-ish art dealer and Bruce, a cop in his 30s-deal with their own sexual trysts and romantic travails with dramatically younger guys. The result is a novel that explores the fragile yet enduring ties of sex, love, and friendship.

All I Could Bare: My Life in the Strip Clubs of Gay Washington, D.C.

“Unafraid to bare it all…readers will feel they’re in the hands of an expert.” – Publisher’s Weekly

“Raunchy splendor…somehow both bawdy and sweetly nostalgic at the same time.” – Dallas Voice

FREE: Download the All I Could Bare audiobook read by me.

Luther: The Life and Longing of Luther Vandross